Te Rūnanga o Ngāti Awa (Ngāti Awa), the post settlement governance entity for the Ngāti Awa, has opposed the consent since the application was lodged by Creswell.  It filed an appeal against the Environment Court’s decision to the High Court that was heard in July this year.

Ngāti Awa argued that the bottling of water from Otākiri would have irrevocable and negative effects on te mauri o te wai – the life force of the water – and render Ngāti Awa unable to be kaitiaki.

Leonie Simpson, Manahautū (CEO), Te Rūnanga o Ngāti Awa says: “It is impossible for us to act as kaitiaki for a resource once it has gone. Once this water is removed from our rohe it will never return.”

Joe Harawira, Tumuaki (Chairman), Ngāti Awa says: “The mauri of our wai is harmed through Creswell’s application.  Successive governments have also failed to address the very real issue of water rights in New Zealand. Why are we exporting our purest water when our own people living in Whakatāne, Murupara and Kawerau drink water of the lowest acceptable quality for human consumption? Why are we giving our water away for free to overseas companies whose shareholders will be the main beneficiaries?  And why are we supporting a proposal to build a manufacturing plant with the capacity to create 1,800 single use plastic bottles per minute?”

Ngāti Awa are considering their options following the judgment.

For more information or to arrange an interview please contact:
Bianca Ruakere: 021 453189

Ngāti Awa
Ngāti Awa are the descendants of Te Tini o Toi, the original inhabitants of the Eastern Bay of Plenty region, and the people who arrived on the Mataatua waka. Today Ngāti Awa represent 22 hapū and have 19 marae. For more information please visit the website: https://www.ngatiawa.iwi.nz/

Nongfu Spring
Nongfu Spring is China’s largest supplier of packaged water and ranks as one of the top 20 beverage companies in China. They were founded in 1996 and are headquartered in Hangzhou, Zheijang Province, China. Creswell New Zealand Limited are a subsidiary of Nongfu Spring. A recent sale of shares in Nongfu Spring was the most oversubscribed IPO in Hong Kong’s history and raised more than US$1.1 billion in cash. The company owner Zhong Shanshan briefly became China’s richest man with a personal net worth of around US$57 billion: https://www.cnbc.com/2020/09/24/founder-of-bottled-water-nongfu-spring-becomes-chinas-richest-man.html 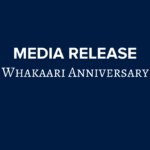 Update on Whakaari - He Rā Whakamaumaharatanga