The passing of Dr Mason is a devastating loss to Ngāti Awa. We mourn a dedicated and devoted servant to the survival and prosperity of the Iwi, whom for the greater part of seven decades has served his tribal and wider communities generously and faithfully. His efforts over the years have ensured the survival of critical anchor points, scaffolding the cultural landscape of the Iwi, for the benefit of current and future generations.

Renowned as a holder of customary knowledge, Dr Mason was an active member of Te Kāhui Kaumātua, the principal advisory body for Te Rūnanga o Ngāti Awa. He was highly regarded as a custodian of hapū whakapapa, waiata, and the history of Ngāti Awa.

As the longest serving board member of Te Rūnanga o Ngāti Awa, a former Secretary, General Manager and Chairman of this entity and its predecessors, his customary knowledge and wisdom informed the Treaty settlement process for Ngāti Awa and preserved our cultural narratives and traditions in many forms, including our Settlement legislation.

Te Rūnanga o Ngāti Awa, and Ngāti Awa are indebted to the legacy Dr Mason imparted and the integrity he led with.

We extend our condolences to the whānau whom he is survived by, his wife Erina (Bunty), his son, Joseph, daughters Eneta and Waana, and his mokopuna.

Te Rūnanga o Ngāti Awa offices will be closed for the duration of the tangihanga, from Monday the 26th of July, to Wednesday the 28th of July. For any urgent inquiries, please contact runanga@ngatiawa.iwi.nz 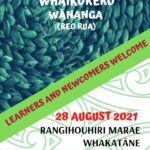 Our registration page is currently undergoing maintenance and will be back up and running as soon as possible!

If you want to register with Ngāti Awa, please email register@ngatiawa.iwi.nz or call 073070760

Our Member Portal is currently undergoing maintenance and will be back up and running as soon as possible!

We apologies for the inconvenience.